I love artichokes, but like many, have often been scared away from cooking them. Supposedly they are labor intensive, difficult to work with, and take up lots of time–that’s a lie! I had the artichokes cleaned and soaking in lemon water in under five minutes. This is a dish you can make on a week night or as a weekend afternoon snack–plan on 30 minutes of minimal work. These artichokes are prepared in the traditional manner of Roman Jewish cuisine–they are simple, nutty and fresh and have been perfected over all these years.  One of my all time greatest food memories is eating these in the Jewish Quarter of Rome. Artichokes are in season now so make it happen.

Choose the ones that are heavy for their size, do not have bruised or brown spots, and that have tightly packed leaves. 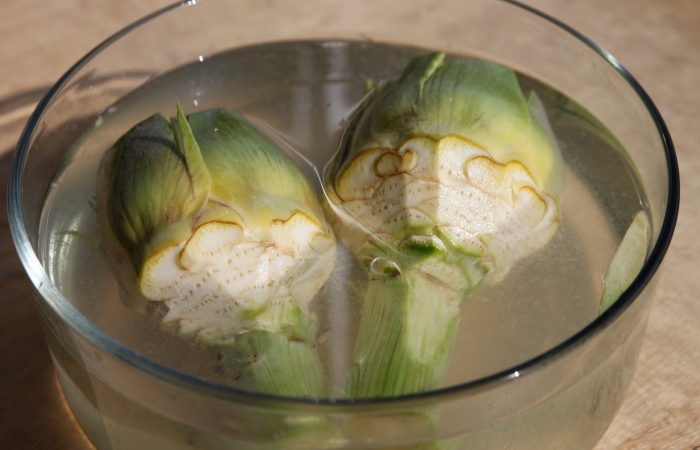 You will have to acidulate your water so that the artichokes do not brown quickly. Once the fibrous outer leaves are removed you will only be left with tender leaves, stems and hearts.

You do not need so much oil to cover the artichokes in full–a quick flip will make sure your artichokes cook and brown evenly. You will flip them just a couple of times.

Always serve with a fresh lemon to squeeze over the artichokes while piping hot.

The hearts will be tender and the outer leaves crisp and nutty. You can eat every part.

1) Fill a large bowl with enough fresh water to hold the two artichokes. Squeeze juice of one lemon into water and stir to acidulate your water.  You must do this or your artichokes will brown within minutes once cut. Place bowl of acidulated water to the side.

4) Once the outer leaves and base have been removed, cut the stem leaving about two inches of stem attached to the artichoke. The stem is delicious and great once cooked. Give it a quick peel so that the fibrous outer portion is removed.

6) Cut the artichoke in half lengthwise. Cut again into the artichoke as if you were to make the halves into quarters, but do not cut completely. Instead, just leave a slit in the artichoke. Do not cut into the stem, only the leaved portion about halfway down. You want to do this so while they cook in the oil, the oil will get into all portions frying it nicely.

7) After halving the artichokes and adding the extra “quarter slit,” place the artichokes in acidulated water. Leave them there till ready to cook. Make sure they are covered and you continue to turn them to avoid browning.

8) Add olive oil to a medium sized pot. You will not be completely submerging the artichokes in oil while frying. I recommend about 1 1/2 cups olive oil–just enough to add an inch or two of oil to your pot.

9) Heat on medium high till oil is hot. While oil is heating remove artichokes from acidulated water, dry, and rub with salt & pepper. Try to get the salt and pepper into the interior of the artichoke. Then add artichokes to hot oil. If your pan is too small for both artichokes, cook in two batches.

11) Your artichokes will be done when browned on both sides and the stem tender–approximately 10 to 12 minutes. Remove artichokes from hot oil and place on a wire rack or paper towel to briefly let the oil drain. Serve immediately with a squeeze of lemon and dash of sea salt.  Just pull the crisp leaves off and eat whole with your fingers.